skip to main | skip to sidebar

This Seiko striking clock is in for repairs. It had stopped striking and even the time side stopped when the clock was put on 'strike' mode. I do not usually work on quartz movements but I was intrigued by it's hybrid configuration.  It dates from 1981-82. What makes it interesting is the fact that it is a quartz clock with a motorized-mechanical striking module. Also, It has a smooth sweep seconds hand and the seconds hand resets to 0 (12 o'clock position) when you pull out the setting knob. Quite impressive for 1981 I should think!

In the picture below you can see the movement side of the clock (upside down). The gongs are visible to the left and the hammers can be seen emerging from the lower left corner of the movement. The long black shaft emerging roughly from the top-centre of the movement upwards towards the 6 o'clock position is the setting knob. 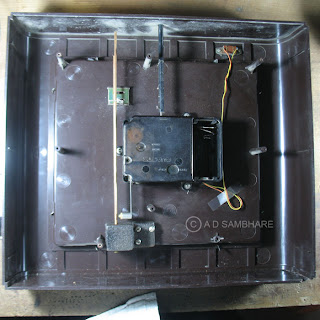 Here you can see the strike train with a motor on one end (left) and the hammers on the other (right). This clock has never been serviced. The oil in the striking train pivots had turned to a thick sticky paste. A clean up, fresh oil and a new battery has got the clock striking again. 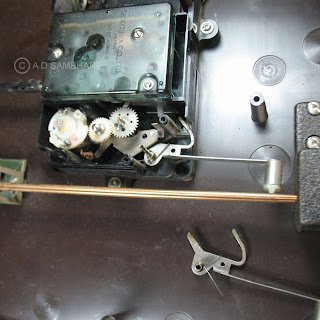 However, it misfires between 10 and 3 o'clock. I will have to have a look at the dial side of the movement. If it has the traditional rack and snail mechanism (as seen in mechanical striking clocks) then I assume there is dirt there that is causing the problem. I will post pictures of the dial side when I open it up.

Aditya
Pune, India
A D Sambhare has been in the forming for several years. I have always been drawn to and interested in the inside of watches and have been exploring my love for watches by collecting and repairing antique pocket watches for years. On this blog I intend to share the making of my watches and also other interesting watch related stories